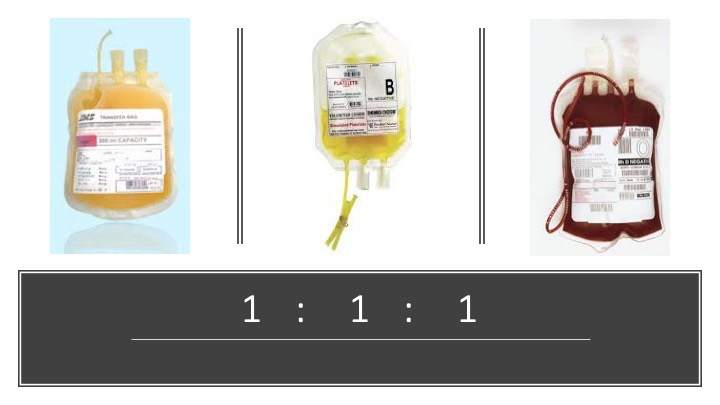 Many conventionally held dogmas in trauma resuscitation have been disproven in the past decade. Generous use of crystalloids during the early resuscitation phase of trauma, recommended by the Advanced Trauma Life Support Course, based on earlier studies, has been largely shown to be harmful. Coagulopathy was considered unlikely with up to transfusion of six units of packed red cells. Supplementation with plasma and platelets was thought to be unnecessary unless there was clinical or laboratory evidence of coagulopathy. However, we know today that trauma-induced endogenous coagulopathy occurs at the onset of shock; besides, conventional tests of clotting function are poorly sensitive in coagulopathy associated with trauma. There has been a major shift in the resuscitation strategy of major trauma over the years. One of the most important tenets that have emerged in the management of severe trauma has been damage control resuscitation.

Let us consider the key elements of damage control resuscitation in major trauma.

Recognition of the actively bleeding patient

Damage control resuscitation applies specifically to the patient who is actively bleeding. Hypovolemia from ongoing blood loss is compensated by vasoconstriction, with the maintenance of normal heart rates and blood pressures. However, a fall in cardiac output and compromised organ perfusion occurs in this compensated state. In this state of cryptic shock, hemodynamic parameters may appear normal; however, it is associated with increased mortality (1). The response to a fluid bolus may help identify patients who are actively bleeding. Patients who respond to a fluid bolus and continue to remain stable may not have ongoing bleeding; however, non-responders and transient responders are likely to be actively bleeding. In practice, a considered decision on the likelihood of ongoing bleed must be made based on the nature of injuries and the response to the initial administration of a fluid bolus. If ongoing bleeding is suspected, packed red cells are preferred over crystalloids as the initial bolus of fluid.

Cut down crystalloid use

Administration of large volumes of crystalloids leads to major adverse outcomes in severe trauma. Dilution of clotting factors commonly occurs, leading to the perpetuation of coagulopathy associated with major trauma. Hypothermia is another adverse effect of the administration of large volumes of crystalloids. The excessive use of normal saline may lead to metabolic acidosis. Abdominal compartment syndrome with multiorgan failure may be associated with overzealous crystalloid resuscitation. Delayed fluid resuscitation was studied in patients with penetrating injury to the torso, who presented with a pre-hospital systolic blood pressure of 90 mm Hg or less. Patients were randomized to receive pre-hospital standard resuscitation or delayed resuscitation after reaching the operating room. Hospital mortality was significantly less with delayed resuscitation; the duration of hospital stay was also shorter in the delayed resuscitation group (2).

The key to damage control resuscitation is the prioritization of hemorrhage control over perfusion. The blood pressure is maintained at a low level to prevent hydrostatic disruption of the clot. The lowest blood pressure required to maintain coronary perfusion is targeted during damage control resuscitation. Considering that coronary flow occurs mainly during diastole, a diastolic pressure of 25–30 mm Hg may be the minimum target; this may be extrapolated to a systolic pressure target of 60–70 mm Hg (3). For practical purposes, the presence of a radial pulse may be a rough indicator of an adequate level of perfusion (4). Measurement of lactate levels and the base deficit also offers important information on the circulatory state. A drop in the end-tidal carbon dioxide (ETCO2) levels is closely associated with decreasing cardiac output. Continuous monitoring of ETCO2 may be useful in monitoring the hemodynamic status in patients who are intubated and ventilated.

It is unclear whether a strategy of permissive hypotension is appropriate in hemorrhaging patients with traumatic brain injury (TBI). There is strong evidence to suggest that even transient hypotension may lead to worse outcomes in TBI (5). No definite recommendations are available in this situation; however, it may be appropriate to follow a hypotensive strategy if the predominant clinical problem is ongoing major bleeding. However, if TBI appears to be the dominant pathophysiology, adequate cerebral perfusion pressures must be maintained (3).

Coagulopathy occurs in trauma by two different mechanisms. An early, endogenous coagulopathy occurs due to activation of protein C, resulting in the cleaving of factors Va and VIIIa with reduced thrombin generation. Degradation of fibrinogen and excessive fibrinolytic activity also contributes to the early, endogenous coagulopathy. During the later phase, dilutional coagulopathy secondary to resuscitation further exacerbates impairment of clotting function. Dilutional coagulopathy may be prevented using a balanced transfusion regimen, by administering an equal ratio of red cells, plasma, and platelets. Protocols using a balanced transfusion strategy have been shown to reduce mortality and mortality. The PROPPR trial compared the efficacy of a 1:1:1 ratio of plasma, platelets, and RBCs with a 1:1:2 ratio; although there was no difference in the 24 h and 28 d mortality, there were a lower number of deaths due to exsanguination with a 1:1:1 strategy (6). Fibrinogen levels may drop in spite of a 1:1:1 resuscitation strategy; it is important to maintain levels >2g/L with cryoprecipitate or fibrinogen concentrate.

Tranexamic acid has been shown to reduce blood loss and mortality in bleeding trauma patients. The CRASH II trial revealed a mortality reduction of 15% in patients with exsanguinating hemorrhage. Tranexamic acid must be administered within 3 h of injury; the initial dose is 1 gm followed by a repeat dose of 1 gm infused over 8 h (7).

It is important to note that conventional parameters of clotting function, including APTT and INR are poorly sensitive for the coagulopathy associated with major trauma; besides, they can only be tested intermittently. Point of care testing of coagulation function with thromboelastography (TEG) is being increasingly used to monitor trauma-induced coagulopathy. It is possible to assess the entire coagulation cascade including platelet function with TEG.

View all posts by josechacko